Born in Ruxton, Maryland to a devout Catholic family, Mary Catherine is the granddaughter of Dr. George Avery Bunting, the founder of the Noxzema Chemical Company. At age 16, while a passenger in her boyfriend’s car, Mary Catherine was in a serious accident. Her head collided with the dashboard, the bones in her face were broken, and she spent 10 days in the hospital with her jaw wired shut.

Mary Catherine developed an appreciation for the tender care she’d received from her nurses, and this inspired her to join the Mercy family as a junior volunteer as a teenager. In 1958, she earned her Nursing diploma at the Mercy Hospital School of Nursing. While pursuing her career, she also followed her faith; she joined the order of the Sisters of Mercy in 1959.

In preparation for ministry, Mary Catherine went on to receive a bachelor's degree in Sociology from Mount St. Agnes College and advanced degrees in Nursing from the University of Maryland. Over the years, she worked in Mercy's Labor and Delivery department and taught at the Nursing School.

From 1972 to 1996, Mary Catherine practiced at Mercy Southern Health Center, an outreach center in South Baltimore, eventually becoming a Nurse Practitioner. She often worked beyond her scheduled hours, making home visits in struggling communities where many people lacked the resources to properly monitor their health.

In 1974, Mary Catherine felt that God had a different plan for her, and so she left the order but continued to nurse and volunteer. Having regained access to her worldly possessions, she began donating to charities in deeply significant ways. Especially after traveling the world and witnessing desperate poverty, Mary Catherine stated: “I can give so much, but I can't change the system so everyone has health care.”

But Mary Catherine doesn’t let that stop her from trying. To help provide spiritual support for patients and residents, in 2002, she established an endowment for the pastoral care programs of Mercy and Stella Maris. In 2007, Mary Catherine gave the largest gift in Mercy’s history to build a state-of-the-art 18-story facility which is named in her honor. The Bunting Center opened to the public in 2010.

Sister Helen Amos remarked: “Mary Catherine is a beloved friend of Mercy. She has embodied our mission as a caregiver and advocate on behalf of women, children, and particularly the underserved.”

“My whole life has been Mercy,” Mary Catherine said. “I’m proud of the Sisters of Mercy and their commitment to serve all the people in the city.” 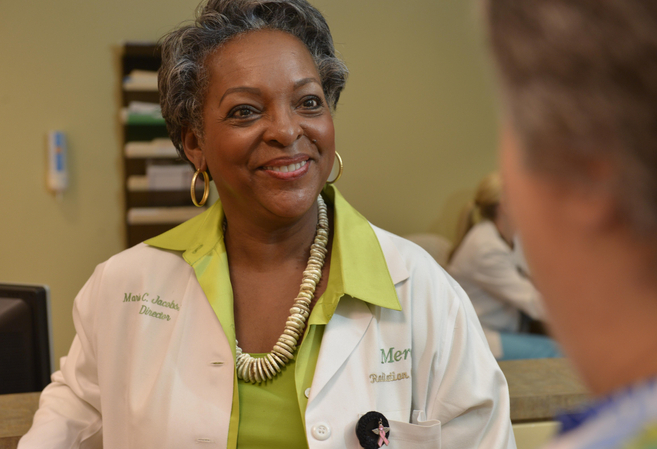